Sometimes your LaTeX projects are hidden deep in a Git repository. Let's take a look at CV template by Nicola Rainiero which is hosted on GitHub.

In Papeeria you can easily clone the whole repository into a new project, but wait. Besides the CV template, there is a lot of other cool stuff which you probably don't need at the moment. Can you just clone a single folder with the template?


Yes, you can. Expand Branch section in the dialog and choose the folder which you want to checkout – /CV_models/EuroPassCV in our case – and create a project.


Your new Papeeria project will have only the sources from the chosen folder. And if you had write permissions in the repository (are you Nicola?) you would be able to push the changes from Papeeria to that very folder seamlessly.


This CV template is now available from our Template Gallery. Enjoy!

Posted by Dmitry Barashev at 15:59

We're enhancing our Git integration which was first announced in April and allowed for importing Git repository when creating a new Papeeria project. Today we're launching new synchronization features which enable rich git workflow: pull, checkout, branch, merge and push. Git sync is available to both free and paying users, except that some restrictions apply to free users.

Working with Git from Papeeria

I created a new project from our clone of Deedy resume hosted on GitHub and Git section in the Version Control pane shows me some information.


You can see repository URL, name of the branch and the last revision I synced with.

Pushing changes from Papeeria into the repository

I added a new empty file and now I am going to submit it to the repository. Clicking Sync now button in the Version Control pane opens Git Sync dialog where I can pull the changes from repository and optionally push my changes. However, I need to setup my credentials to be able to push. GitHub uses SSH public key for authorization, so I copy my public key from SSH key section in the dialog and paste it into my account on GitHub.

Now I can push, and it completes successfully.

I added a few more lines and at the same time my colleague who prefers to work offline cloned the repository on his laptop, changed some lines in his favorite TeX editor, committed the changes and pushed to the repository. We're both using the same branch and I have to pull his changes into Papeeria and merge them with my work. I open Git Sync dialog, pull the changes and merge completes fine as we didn't touch the same lines.

However, when it comes to merging we're not always that lucky. Now we both have changes the same line and my attempt to sync failed with merge conflict.

Project in Papeeria remains intact when merge fails so if I was not in the mood to resolve the conflict I would've just continued my work and merged later. But I don't mind resolving the conflict so I click Start resolving.

Papeeria suggests committing my work into a temporary branch -- that's cool because it allows me to commit and push my updates immediately without waiting for merge.

Now I need to do the merge and I realize it requires running an external git client. I decide to enjoy a cup of coffee before digging into the command line and I close the dialog. Papeeria shows me a reminder about the ongoing merge in the Version Control pane.

In a dozen of minutes I get back to Papeeria and click Resume resolving. Merge dialog shows me a few commands which I have to run. git clone, checkout, merge, edit the conflicts in the text editor, git add, commit, push... done! I've merged the changes and pushed them back to papeeria-edition branch which I had been synced with before the conflict happened. I proceed to the third step and switch to papeeria-edition branch again.

Learn the details of resolving merge conflicts from our help pages


Things to keep in mind

Have fun with Git and do no hesitate to contact us in case of any troubles!
Posted by Dmitry Barashev at 23:24

Did you ever find yourself trying to recall what command produces long right arrow? You probably googled it or consulted the Comprehensive LaTeX Symbol List. In Papeeria you can now use Math Assistant.

You can open Math Assistant dialog using Insert Maths... command in the editor context menu (hit Alt+Insert to open context menu or ⌃+N if you're on Mac OSX). Keyboard is fully supported, so you can choose the required symbol without moving hands to mouse.

Posted by Dmitry Barashev at 10:21

Discussions in the margins just got a little bit better:

Posted by Dmitry Barashev at 20:40

This help article is written in Russian, since most of our users who are facing issues with Cyrillic come from Russia.

If you need to change font size, toggle word wrapping or toggle spellchecker, you can do it from the editor settings.


For word wrapping you can also use keyboard shortcut Alt+W.

Posted by Dmitry Barashev at 19:53

Did you ever add red-colored remarks like "citation needed" or "TODO: describe algorithm in details" in the sources of your paper? We're sure you did. If you're an advanced TeXnician you probably used todonotes package, but many authors just add text and highlight it manually.

Every single discussion can be shown or hidden, and all discussions can be switched off in the editor settings.

Discussions are stored directly inside the document text as LaTeX comments and remain readable if you export project and continue working offline using other editors.

Use font size option in the editor settings to make editor fonts bigger or smaller.


In the simplest case when repository is public and you want to create Papeeria project from the root directory of repo's master branch you need to paste repository URL only and optionally your new project name.

In more complex cases when you want to clone a particular sub-directory and/or some particular branch, you need to expand Branch section, wait a little bit and choose branch and folder to take the sources from.

Finally, if you want to clone a private repository, you can do it securely as well. We generate SSH keys for you and you need to authorized a public key on Git server. When it is done Papeeria will be granted access and will be able to clone the repo. More details and instructions for GitHub and Bitbucket are available on our help pages.
Posted by Dmitry Barashev at 21:29

Posted by Dmitry Barashev at 17:22

Those who work on complex documents will like our new feature: dual monitors support. It allows to type text in one browser tab (Editor) in one screen and deliver the result PDF to other browser tab (Viewer) opened in the second screen. When PDF pane is maximized in the Viewer tab you see more without the need to zoom out and it makes the typesetting process way easier.

This is a sort of beta- feature, so it requires some work to setup:

You will see "Compiling... please wait a sec" message in the Viewer, and if everything is okay, in a few seconds PDF will be delivered to the Viewer and synced with the caret position in the Editor.

What if your two monitors are those which come with your laptops? No worries, it works the same way on different computers. Just type text on the editor laptop and watch the results on the viewer. You can even use a tablet connected to plasma panel via HDMI as a viewer!

Did you know we have a Template Gallery? Did you know you can search the templates? Cool, now you can link the search results. Just do a search and copy link from the browser address bar.

Try these examples: thesis templates from a few universities around the globe; CV templates in English; cookbook in Russian

Posted by Dmitry Barashev at 22:24

We've been rolling out a series of small updates last weeks, and here is what we pushed today:

Images preview
Click a PNG/GIF/JPG file in your project and we'll show the image in the editor. How come we've been living without this for so long.

Template Gallery improvements
Previews in the Template Gallery are bigger, description text is wraps them and long texts get blurred  at the end
Posted by Dmitry Barashev at 21:25

TL;DR: you can now use minted and verbments packages for highlighting source code listings

There are a few packages in LaTeX which can highlight source code listings. Until recently Papeeria users were restricted to listings package only and could not use more advanced minted and verbments which both use Python library pygments to do highlighting. The reason was that due to security reasons we didn't allow TeX engine to run arbitrary code. However, we've been working hard on isolation of user data and sandboxing compilation processes, and today we enabled shell escaping.


Now everyone can enjoy syntax highlighting with minted and verbments. We also installed minted 2.0 which was released just a month ago.

You can find the sources of the code from the picture above in the demo project.

Have fun, and happy typesetting!

Posted by Dmitry Barashev at 21:26

We just've pushed a new update which adds a template gallery. We launched templates half a year ago, but until recently one could see them in New Document dialog only. Now the searchable list of templates is available to everyone.

Template gallery shows a list of public available templates, submitted by Papeeria Team or by other users, sorted by template popularity. Those who are signed in will also see their own private templates, if any, before the public ones.

At the moment of writing this the most popular templates are in Russian, as we have many users from Russian universities. Type "lang:eng" in the search box to see English or international templates.

No registration is required for downloading a template as ZIP archive of for browsing a template project. If you want to create a new project from template you need to be signed in.

Posted by Dmitry Barashev at 18:23 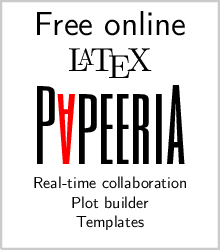 TeX Stack Exchange site, one of the best Q&A resources on LaTeX, is running Community Promotion Ads campaign. They will be showing small banners on their pages for free during the whole 2015 provided that banner gets enough votes from the community members.

Our banner participates in the competition and we need your vote!

How to vote: just click upvote (pen nib upwards) icon to the left of our banner in our answer: http://meta.tex.stackexchange.com/a/5939

Thanks in advance for your help!
Posted by Dmitry Barashev at 13:02